The San Jose Fire Museum is an independent organization, built upon and managed by the efforts of hundreds of current and past members of San Jose Fire Fighters, IAFF Local 230, their families, and countless community volunteers. The organization is registered as a 501 (c) (3) non-profit. 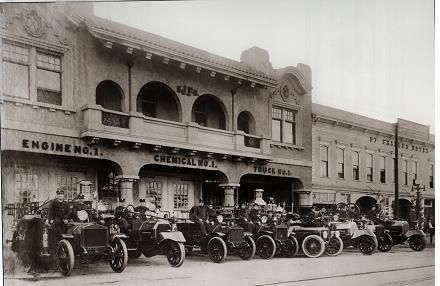 The purpose of the San Jose Fire Museum is to acquire, restore, catalogue, preserve and display historic fire apparatus, tools and equipment and memorabilia and to educate the public on the history of the San José Fire Department.

In doing so we will provide fire safety education to the public, assist the San José Fire Department, the Chief and the city of San José to display items of historical interest to the community and accurately reflect our rich and diverse history.

Today it is called the San Jose Fire Museum.

Thousands of hours and dollars have been voluntarily given by hundreds of people for the benefit of this purpose. Participation in community activities is prime focus.

The Fire Museum provided strong support and actively participated in the construction of the Empire Fire House at Kelly Park. This replica of an original San José fire house is presently utilized as a small fire museum and meeting hall. The Fire Museum has restored numerous rare and antique fire apparatus dating from 1800 through the late 1950’s.

The apparatus and equipment is used by the Fire Museum to represent the City of San José, the San José Fire Department and its members in a wide variety of civic events including parades, musters, static displays and special celebrations. San Jose Fire Museum members and their families prepare and display the apparatus for numerous events a year.

The San Jose Fire Museum maintains a display of apparatus, equipment, uniforms and other artifacts in a central warehouse on Senter Road. It has also acquired Old Fire Station One, at 201 North Market Street, which has been established as a national landmark and is dedicated to the display of the museum’s collection within a genuine San José fire station.

San Jose Fire Museum Website
About
In Your Community

NEP is a Union Workplace!